After visiting Backus Woods before breakfast, this morning, we were greatly anticipating getting back out in the field to visit Jackson-Gunn Old Growth Forest. Pulling to the side of the concession road, we were initially daunted by the entranceway, overgrown as it was with the trail barely visible. The yellow jewelweed (Impatiens pallida) was waist to head height and still wet from yesterday’s rain, so within a few metres, we were soaked. Spiders had made webs across every break in the trail, so we spent some time clearing those, as well. While to some, this may seem overwhelming, it was simply part of the adventure because we had an inkling of what lay in store.

Jackson-Gunn Old Growth Forest is perhaps the closest one will come to a natural cathedral in eastern Canada. Many of the sugar maples and beech trees were over a metre in diameter and, like a cathedral’s pillars, shot straight up from the ground for 15 to 20 metres without any branches. It was like standing in one of one England’s great cathedrals with light pouring in from the clerestory windows of the canopy, a carpet of green jewelweed spread across the nave!

We later learned that this is a classic characteristic of a true old growth forest. Unlike today’s woodlot trees that spread outwards under an incomplete canopy, the saplings of these centuries-old trees would have put all their energy into growing upwards towards the canopy, leaving this beautiful open understory. It’s like a gymnasium or a domed stadium with this cavernous space below the canopy large enough to play a game of touch football. Ecologists estimate that for this forest to have these characteristics, it must have been intact and undisturbed for at least 600 years and there is no record of any logging ever taking place. No where in southern Ontario can you find anything like this.

Thank goodness the Long Point Basin Land Trust had the foresight to purchase and protest this remnant of the original forest that once blanketed southern Ontario. Only here can one truly imagine what an amazing natural place this once was. After visiting this property, it would be helpful if you considered making a donation to the the Nature Conservancy of Canada and/or the Long Point Basin Land Trust to help them protect more natural properties. 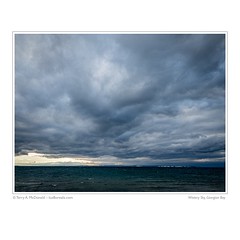